To most people, a few laps around Jesmond Dene or a trip down to the coast would constitute a productive bike ride. Not for Wade Financial’s Steve Conway. The Managing Director took time away from running the financial services business to undertake the Deloitte Ride Across Britain challenge, cycling from John O’Groats to Land’s End in nine gruelling days – without an ice cream or a beach ball in sight.

Steve had always been a cycling enthusiast from a young age, competing in the national time trials as a junior, before personal and professional commitments took centre stage. “As you get that little bit older, you end up with cars, jobs, kids and everything else, so you just fit it in when you can,” he explained. Steve still found the time to participate in a number of bike rides, raising money for charity along the way, but few stretched further than 100 miles. What drove the man to take on a course ten times the length of his previous routes? “It’s such an iconic ride itself, and it’s something I’ve wanted to do all of my life. As you get older, you realise that it’s not going to get any easier, so I had to push myself to do it. It’s classed as an extreme challenge, and I thought ‘well actually, that’s the one to do’.” 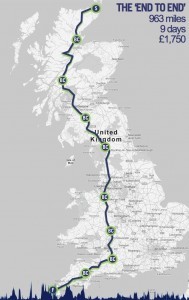 The route taken by Steve – a staggering 963 miles from John o’Groats to Land’s End.

The steep gradients, the overpowering headwinds, the deteriorating weather and the cumulative effect of each stage all made for a tough journey, both physically and mentally. “What I did find, as much as it is a physical endurance event, for want of a better word, psychologically it’s actually really tough as well,” Steve admitted. “You’ve got no real time to enjoy it sometimes, and you’re plodding away, so you’ve got a lot of time to think whilst you’re actually on the bike – sometimes about the pain you’re in, sometimes about how cold and miserable it is. We had appalling weather, even though it was June!”

Still, Steve persevered, triumphantly stating that he never hopped from his saddle to push his bicycle up the arduous terrain. “Some of the days had up to 10,000 feet of climbing in total, on top of 120 miles. They sent me an email which showed me the amount of total ascension was twice the height of Everest over the ride, something ridiculous like that. You just think, ‘bloody hell! No wonder I’m tired!'” Though not quite as difficult (not to mention dangerous) as attempting to cycle up the world’s highest mountain, the trek still had its fair share of daunting summits. “Some of the hills were particularly steep, like Shap Fell, for instance; that’s just a long slug of a climb.”

The route saved the worst for last – something that Wade Financial colleague Dave Hetherington deliberately failed to point out. “He knew which way I was going, but didn’t want to mention to me about the two really, really big hills. They’re ridiculous, about a 25% gradient. And there’s two of them! You get up the first one, and you think, ‘right, I’ve done it, that’s it, it must be downhill from now,’ and then there’s another one! It’s like, ‘where did that come from?!’ Right towards the end, that’s pretty torturous stuff. It was tough – very emotional, in terms of your mental energy as well as physical energy. But very good.”

For all the lamentations, there were some gratifying experiences nestled in amongst the nine days of self-inflicted torture on two wheels. The scenery was, in Steve’s words, “stunning”, particularly in Scotland and the Lake District, with Glen Coe’s idyllic slopes taking his breath away. “You get to absorb so much more of the scenery around you, because you see it all at once, whereas even in a car you seeing it out of the little bits of the window.” He was equally impressed with the setup and the warm camaraderie between the riders – but reserved the highest praise for the food. “The catering was excellent. I was one of the few people who actually gained weight whilst I was away, but I did eat everything!” What’s more, without those testing climbs and hellish gradients, Steve would not have learned the true definition of the word “grippy” first-hand.

The keen cyclist admitted that he couldn’t bear to so much as look at his bike in the weeks that followed, but now that the dirt has settled, was it all worth it? “It was definitely worth it. When I look at the map of where I’ve been, how far I’ve travelled and the hills I’ve been up, I do feel an incredible sense of achievement. It was worth every penny.”

Steve paid those pennies himself, maximising the amount of funds that would go to his chosen charities. He rode for Macmillan Cancer Support, amongst others, aiding a cause that is close to his heart through professional – and personal – relationships. “I’ve got quite a few clients who are suffering with cancer and are getting treatment, benefiting from the superb care that Macmillan nurses give them, and all of the aftercare support and everything that they give to the wider family as well.”

With his knees fully healed and his ankle no longer swollen, Steve can look forward to getting back on the road – though not necessarily in the near future, with less intense cycle trips that accommodate “more time for tea and cakes” on his short-term agenda. Next year is a different matter, he intends to cross the Channel – on the ferry, not on his bike – to witness the Tour de France, as well as partaking in a little recreational cycling himself. “I’m obviously not competing in it – you can’t! – but I’ll be following the same routes and going through the Alps, following the mountain routes and doing some proper climbing – not like the little bit I’ve just done!” 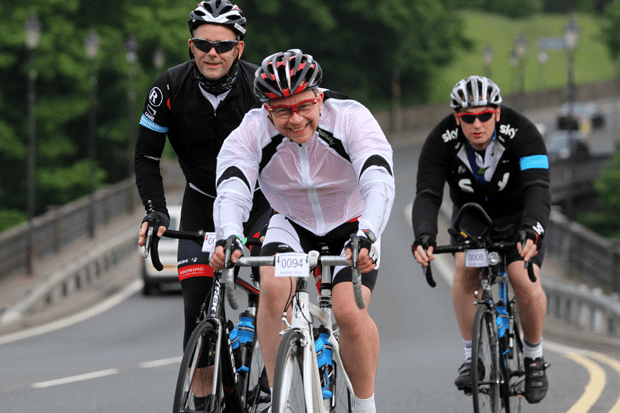 If Steve is to follow the tyre treads of Froome and Nibali up Alpe d’Huez, he will have to put himself though yet another excruciating training regimen. But, for now, a lap or two around our North Shields office should suffice.