The 29-year-old has been at the club for over two decades, amassing over 250 appearances in the famous black and white stripes since his first-team breakthrough in 2004. Local lad Taylor, a Wallsend Boys Club graduate, endeared himself to fans early in his career with some gutsy performances and an infamously comical handball against Aston Villa.

‘Tayls’ has been there through United’s recent highs and lows, suffering the ignominy of relegation to the Championship in 2009, before playing his part in United’s title-winning return to the top flight  at the first time of asking. He was also a member of the back four that finished fifth in 2011/12, his campaign curtailed before Christmas by injury. A return to fitness and form the following season saw Taylor touted for international recognition, earning an England call-up in March that year.

Bad luck with injuries have limited his outings for the first team in the past two years, hamstring surgery currently keeping him on the sidelines for up to two months, but Taylor remains an integral part of the Magpies’ squad, whose passion and commitment to the club is never in doubt.

Taylor will be discussing his lengthy United career and the current state of play at Blue Flames Sporting Club on Tuesday 8th December, starting at 7.30pm, with Newcastle United stadium announcer and local radio host Justin Lockwood serving as host for the evening. A pie and peas supper will be served up at the half-time interval, and a number of light-hearted games will be played throughout the night.

Tickets cost £15, and all profits from the event will go directly towards the day to day running of West Allotment Celtic, a football club that plies its trade in Division One of the Ebac Northern League. Having earned promotion to the top flight in 2013/14, Allotment managed to stave off the threat of relegation the following year, despite operating on a significantly smaller budget than their divisional rivals. With new manager Jon McDonald at the helm and a fresh influx of young talent coming through at Whitley Park, Allotment will hope to achieve much the same this season.

Wade Financial are already hosting a sportsman’s dinner featuring guest speaker Steve Black in order to bring in some collateral for the Benton-based club, and financial planner David Dodds – one of the commercial team at West Allotment – was thrilled to see the club secure a player of Taylor’s standing for their annual talk-in.

“Steven has generously supported us in the past, and has very kindly offered his time to raise money for West Allotment. It affords Newcastle fans the rare opportunity to speak with a current member of the squad, whose insights and anecdotes will make this night a particularly memorable one.”

Tickets for the talk-in can be bought from the reception area at Blue Flames Sporting Club, or from a West Allotment Celtic club official. 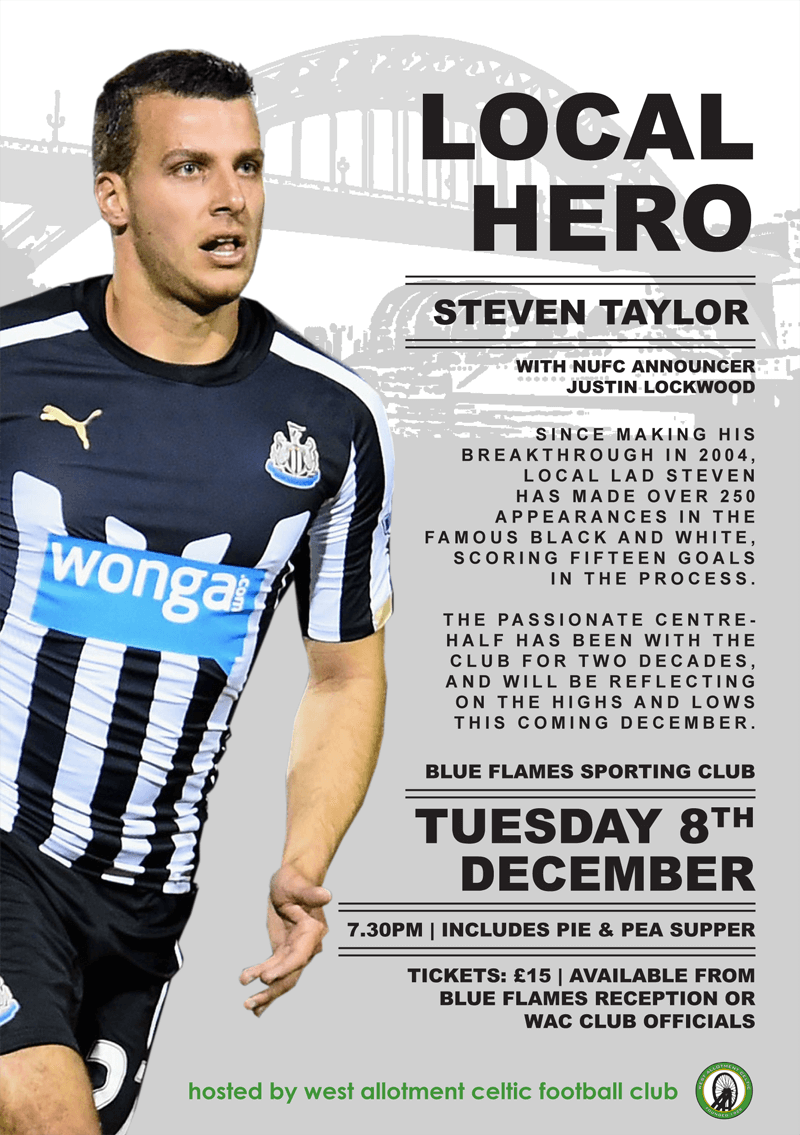