Back in the pool after six weeks away, fellow early birds are regaled with my stories of swimming off the coast of Australia on Boxing Day. Whitley Bay it wasn’t.

I noticed a few stiff bones and aching muscles as I tried to get back into early morning routine. Age. My annual check up approaches. Should I admit that I can no longer hear the conversation in a crowded restaurant? Or, like most men, do I soldier on regardless and not bother a busy doctor?

A few weeks back, a young man on the London Underground kindly offered me his seat. I was pleasantly surprised that such courtesy still existed. As I graciously declined, I went into an urgent self examination. Did I look pale, was I sweating, limping or otherwise showing signs of decrepitude? I had to conclude that the seat was offered purely on account of my age.

Last week, as I arrived for a meeting that was to held in a first floor room, my host inquired sotto voce if I was “all right with stairs”. I nodded meekly whilst debating whether to declare that this was a man who had climbed all the way to Machu Picchu. That was some years ago, my wife patiently reminded me later.

The first credit from The Pensions Service appeared on my bank statement last week as if to give formal assent to my new status in life. Even though my self perception may still be lagging behind in robust middle age, I am increasingly seen by those around me as an old man.

There are some advantages of being seen as senior. Expectations are low as I sit quietly far down the conference table at a meeting, until some sharp observations emerge from under the grey hair to confound my younger colleagues, or so I kid myself. No one expects much from someone of my age.

For the first time in my life, and egged on by a friend in his eighties, I buy a pair of bright red corduroys in the sales. I have never dared be as bold before but am no longer required to conform to the uniform greyness of the city.

Opportunities to purchase abound. It seems I am almost entirely responsible for the recovery of the UK economy as people of my age account for nearly half of consumer spending and three quarters of the individual wealth.

Thankfully, the viagra pedlars gave up on me some years ago. It happened about the time I upgraded the anti virus software. Instead I receive an invitation in an unmarked envelope to buy an aerosol spray which the illustrations claim will surround me with naked young women after just one puff. There is an further leaflet for stair lifts tucked in for good measure.

How did they find out about me? I blame it on attending a weekend described as ‘for adults only’. To my great relief, it turned out to be aerosol free. I was by some decades, in my possibly biased opinion, the youngest person present. Once I had taken a deep breath and downed a glass of wine, I thoroughly enjoyed myself and have booked to go back next year, taking advantage of a generous discount by doing so before departure. Such clever marketing.

I do not identify with any of the elderly models used to illustrate all the promotional material for grey pounders. They do not look like me in any shape or form. But I have to accept that I am a commodity and that is increasingly how the world sees me. Perhaps I should enjoy the civilities and privileges that it bestows. 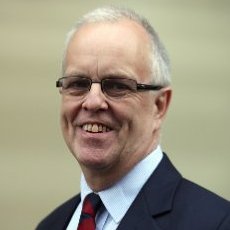 This article was originally featured in The Journal.