Every year, as trees shed their leaves and the nights draw ever shorter, professional and amateur runners alike don their vest tops and running spikes, descending upon the streets of Newcastle in their thousands. The UK’s most prestigious road race, the Great North Run attracts the big names – Olympic and World Champion Mo Farah the latest in a long list of stars to line up along Claremont Road. The majority of participants left trailing in his wake may not be in with a chance of winning the event, but their collective goal is no less important. The aim is to complete a self-administered challenge; the prize goes towards the most noble and worthy causes.

One man who threw down the gauntlet in the name of charity is Wade Financial’s David Dodds. The financial planner encourages his clients to live life to the full – an ethos he himself demonstrates away from the office. “Each year I try and set myself some goals, things I’ve never done before, so I thought that at the age of 51 it would be a good idea to do a half-marathon.”

A keen badminton player, girls’ football coach and outdoor enthusiast, David is no stranger to physical exercise in challenging climates. “I’ve done some treks in the Sahara desert and a trek in Peru, which was physically quite tough. I did do some training for a thing called the Paras’ 10, got right to two weeks before the event, and then I got injured. That was a ten mile run with a 35 lb pack on your back, with army boots.” And yet, despite traversing down the A167 countless times in his car, he covered new ground when taking to the road on foot. “I did stuff like that with the forces, but I’ve never actually done a half-marathon before,” he admitted. 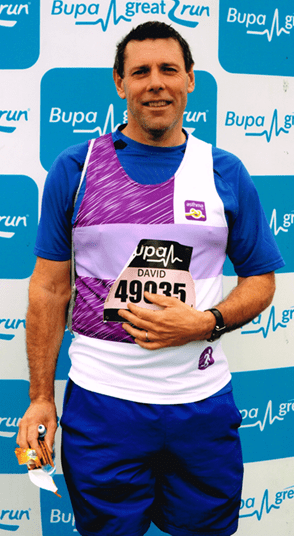 Having moved through Gateshead and across South Tyneside at a steady pace, David crossed the finish line at South Shields, two hours and thirty-five minutes after setting off from Newcastle City Centre – a fine achievement, and one which the father-of-four can be proud of. “I could’ve done it a bit quicker, but I was told by various doctors I know that most of the people that come into the medical centre are people that have run too fast, get carried away with the day. After the first mile, which was eight minutes, I deliberately slowed myself right down. But I ran all the way, and finished, and that was the goal I wanted to do.”

One group undoubtedly delighted with his performance is Asthma UK, the country’s leading asthma charity. The organisation provides advice and support for asthma sufferers, whilst also funding research to better treat – and , ultimately, cure – a condition that afflicts over five million people. It’s a cause that David passionately advocates. “I’m a stand-up speaker for them, I go around raising money for them. They’re one of the smaller charities, and I raised £320 for them. And the team that ran the Great North Run for them raised over £100,000 this year. Asthma UK is close to my heart, they do a lot of good work, so that’s why I did it for them.”

With the regional race now run, David may well broaden his horizons once more. “I might do it again, or I might go abroad and do the Amsterdam half-marathon, which will be a bit flatter! I’ll just see what the summer brings and see how I feel.” He won’t be swimming across the North Sea to get there – thirteen miles of running is more than enough!

A bike challenge at some point next year may also be on the cards. Fellow Wade Financial colleague Stephen Conway is a cycling fanatic, having completed a gruelling challenge of his own in recent months. Could all three members of Wade Financial’s upper circle soon be off cycling in the Southern Hemisphere? “Ian (Little) would probably deal with the logistics and the social side of it!” laughed David. “Steve might be interested. It’s in Panama, Nicaragua, and Costa Rica if I do it, or there’s one in India, and there you’d be doing about 70 miles a day in the heat. So it would be quite a challenge for ten days. I haven’t decided yet, but we’re talking about it!”